For the past few days, I like many others across the world have been snowed in and, whilst it has meant that the dynamics of the family home have felt fraught at best, with children it also gave me time to create. Normally I create my Christmas cards months before the festive season to allow for printing, sales and postage, whilst this has its advantages in being prepared it doesn’t give you that ‘festive feel good’. Being snowed in gave me the great idea to create a Christmas card that I could gift someone special.

After deciding that this is what I wanted to do I made the very brave decision to literally make it up as I went along. For this project  I had some  heavyweight hot pressed Watercolour paper which I taped to my Derwent drawing board. I love modern calligraphy and hand lettering because it suits my illustrative style perfectly. 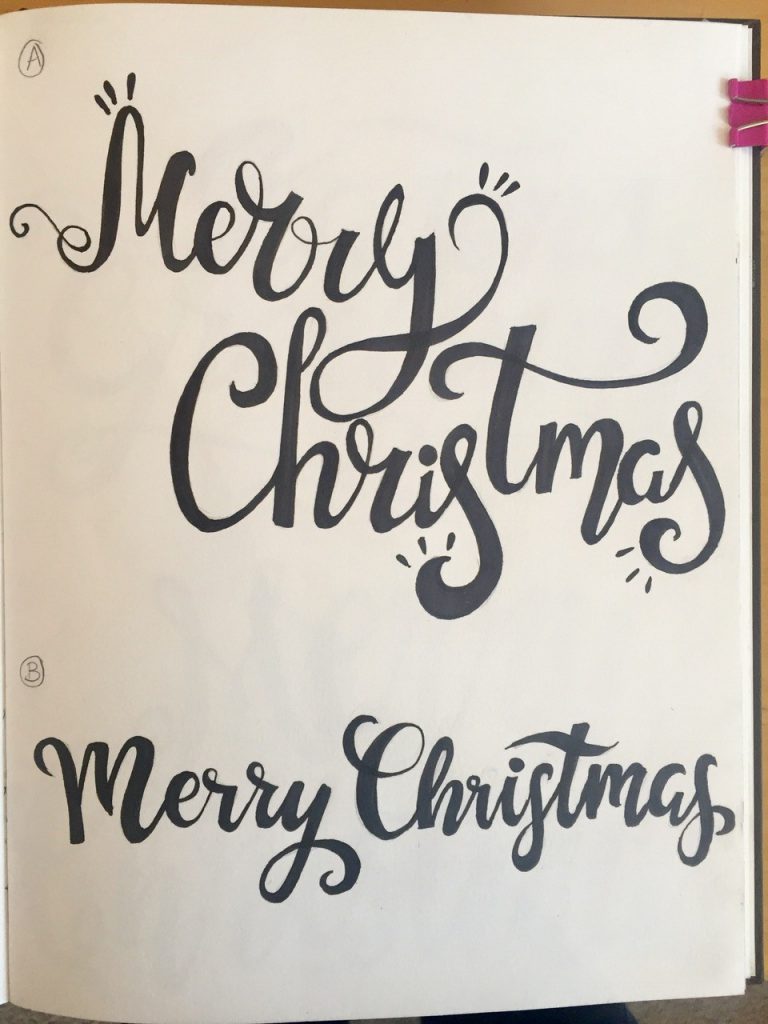 I sketched several different styles in my sketchbook and adapted them as I worked making sure that they would fit into the dimensions and not drop off the edge which can actually be trickier than you think! 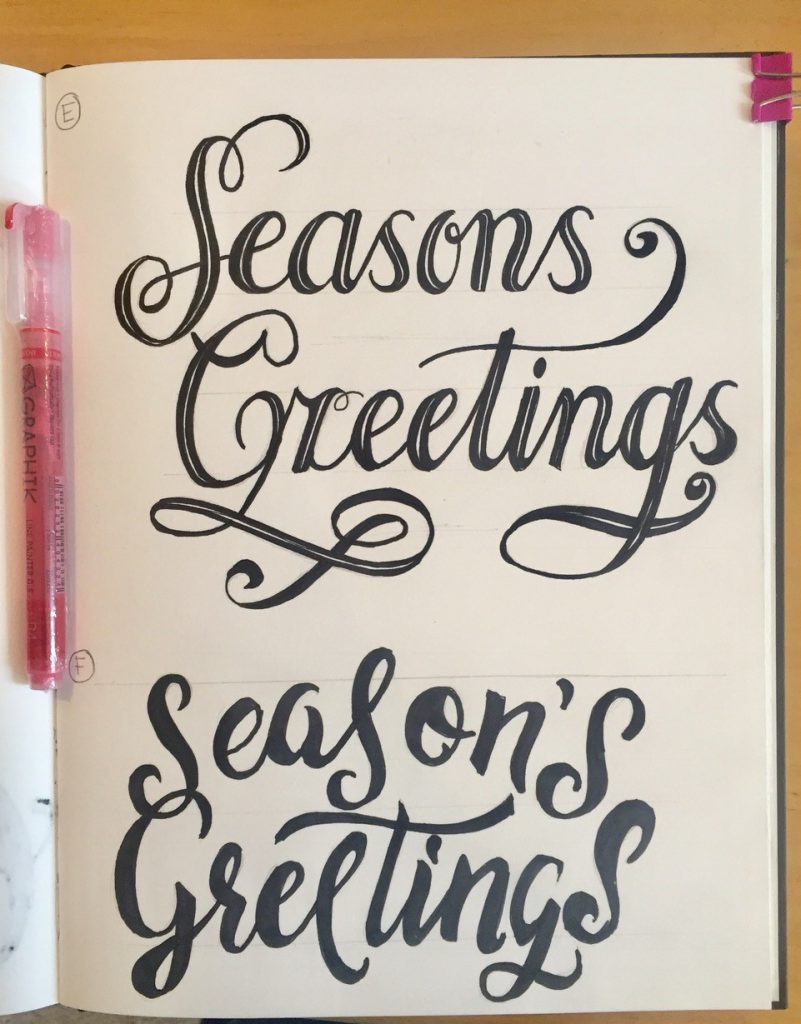 Using a 2H pencil to get a lovely light outline, I transferred the text to the paper and then used masking film and a scalpel to cut round the lettering. I grabbed my Inktense pencils and blocks and got to work.

Inktense come in both pencil and block form, making them both versatile and with a fantastic selection of colours. Before I put colour to paper, I grated the block colours into a palette and added water testing the colour intensity on scrap paper. Inktense is very pigment loaded and very little is needed to create a vibrant wash, ideal for the most eye catching of cards. Once I was happy, I took a sponge and sponged a wintry sky on one of the pieces allowing it to dry in between layers, adding a little more blue nearer the bottom each time. By analysing the composition of my piece, I decided that trees either side of the lettering would be effective and frame the words, so left these areas without colour.

On my second card, I used a large round brush and worked my way from left to right increasing the pigment intensity by adding a little more of the grated Inktense block into the wash water. I left it to dry as it looked quite patchy. I didn’t want to overwork it if I could help it. The sponged sky was so effective that I decided to repeat the process with the snow in the foreground. I masked the foreground into horizontal bands removing a band in the background first.

Then I mixed a different shade of blue, the range has lots of lovely colours but especially in the blues and also a white. I mixed the white to a thicker consistency as white is far more translucent than the other colours and shades. Using a smaller sponge, I dabbed on the snow to create texture. Using the blue at the base and the white at the top, it is important to let the paper dry before removing the next layer of film to prevent bleeding, however Inktense dries really quickly.

Whilst the snow scene was drying, I moved back to the green wash. It was still very patchy after drying, but it actually resembled the branches of a Christmas tree. With a round brush, I added a greater concentration of the green wash and swapped to the Inktense pencils for greater detail.

The pencils can be used like water colour pencils, either dry or dry into wet, wet onto dry or wet onto wet. By washing them into the surface as you work, they appear vibrant and give any piece you work on a real ‘pop.’

At this stage, the piece needed something to balance the left hand side. I added a bauble in the bottom left corner and work from a deep red to a lovely orange based red to a deeper red layered the pencil on curving the strokes as I applied to give the impression of a three dimensional sphere, then blended this with water and left to dry. Using the Inktense pencils, I drew the trees on the snow scene using damp marks in different pressures to create snow on the branches, whilst adding in a little of the blue wash water to reflect the sky colours into the trees, leaving it to dry longer, due to its thicker consistency. Now I was happy with the background and everything was dry-to-the-touch, I carefully removed the masking film from the lettering.

Having completed the background, I decided to use my Derwent Line Painters as their colours are so vibrant but they are also very opaque and cover all sorts or errors! I drew the lettering in with the Purple Rain on the snow scene and the teal green on the tree and bauble. The other advantage of using the Line Painters is their opacity because this photographs and scans really well as it does not reflect the light off it should you wish to copy your card!

Both cards needed a little something extra in detail and the Line Painters were great over the top of the Inktense for patterns on the bauble, drawing in snowflakes and a few squiggles on the branches on the tree piece and on the snow scene for some detail on the trees and some snow flecks in the sky. I created these by dipping the white pen in a little water and then gently blowing across the nib to add a fine spray of snow, after all it wouldn’t have been a snow day without a flurry of snow, would it?

Judith Selcuk is an award winning professional freelance illustrator and artist based in Worcestershire, UK.