Landscapes and Seascapes don’t come any more dramatic than Crown Mines on the rugged National Trust coastline at Botallack.

Ross Poldark’s mine Wheal Leisure of BBC fame is filmed here and at various other locations along these forbidding headlands.

It is a wild and dangerous place, but an artist’s Eden where captivating compositions grab you at every turn. Perfect for Derwent’s exciting, extensive range of graphite based products and drawing tools.

After 3 hours ‘cliff-clambering’ with my Derwent A4 wire bound big sketchbook in hand, I settled on this inspiring, vertical view of the iconic twin ‘tin towers’ that presented me with 4 distinctly different bands of stone strata receding into the approaching shower I was to introduce. 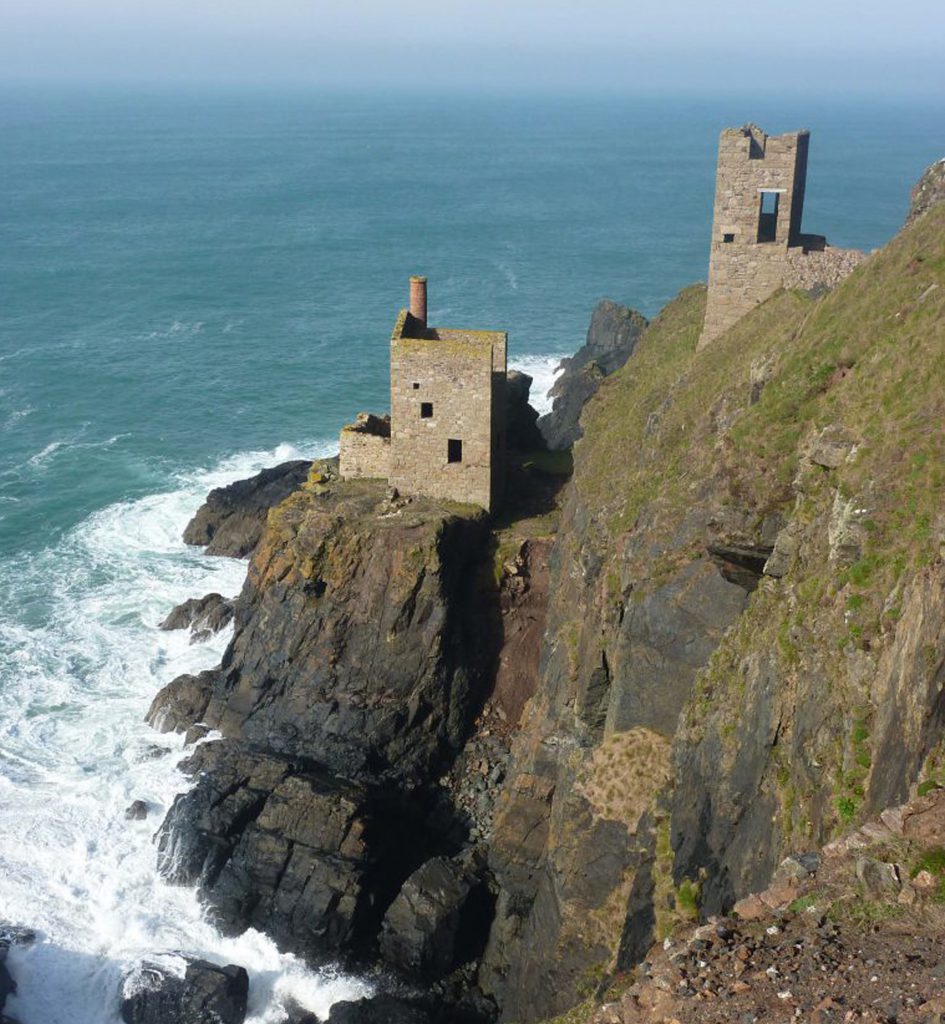 Working on 150gsm A2 cartridge paper I drew in and masked out the mines and basically everything in front of them (apart from the sea/sky on the left).

I then searched through my materials collection for items to lay over the sky to preserve light areas from the powdering I was about to apply. In this instance some grit, stones, straw and cheesecloth sufficed.

I selectively sprinkled the potted powders onto the places to be darkest (i.e. cloud bases, upper sky with some scattered around the mine buildings to give contrast) and sprayed a water/ fixative onto it from Derwent’s Spritzer spray bottle. The paper as it was laid flat allowed the graphite to be wafted down through the various obstacles in its path resulting in random and ragged edges and shapes.

I next used an old vinegar bottle and a couple of brushes from Derwent’s Technique Brushes Set to blob and slash the fluid to give movement to the clouds. The whole lot was then partially dried with a hairdryer and then using their Soft Eraser (from the Dual Eraser Pack) along with their Scraper ‘Dog’ Tool I pulled out wind lines by smudging the half dry graphite. All was then thoroughly dried and all excess materials ‘pinged’ off. 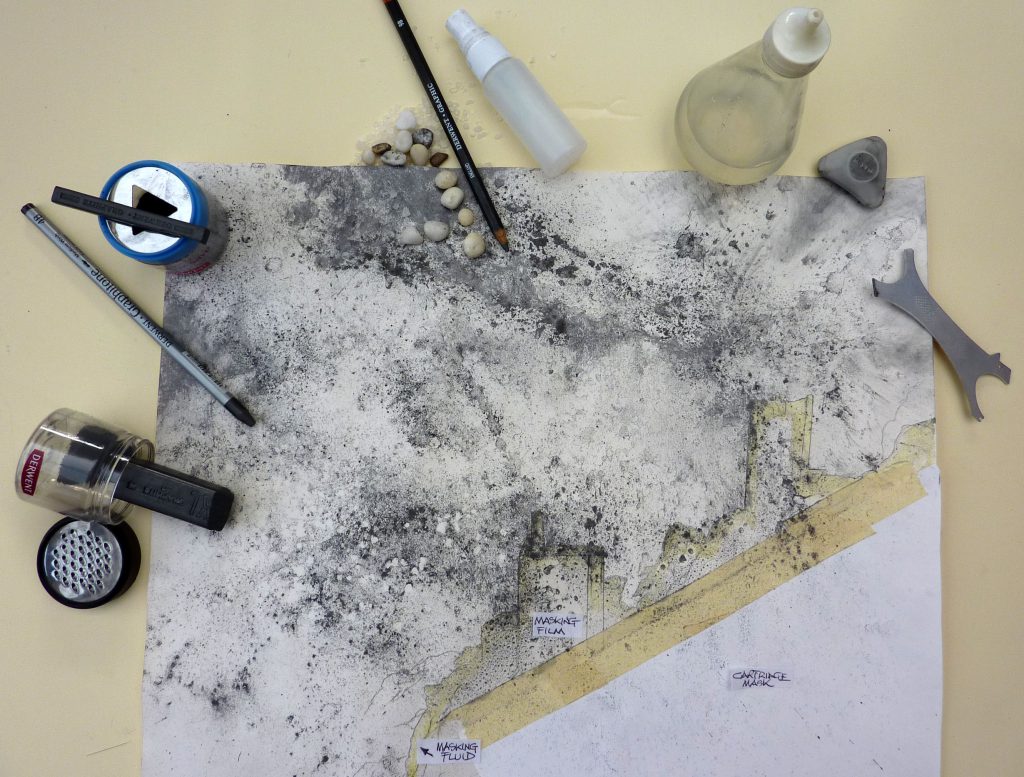 The higher and middle ground of linear work including both Pump and Wheal Houses were rendered in Derwent’s Graphic Pencils using virtually all the velvety B (black) grades plus their 0.5 and 0.7 Precision Mechanical Pencils. I have settled on the above for detail work and general drawing after trying many makers’ pencils as their relative softness is consistent and reliable, plus they will usually take the pressure of some stabbing and stippling motions I sometimes perform when working. 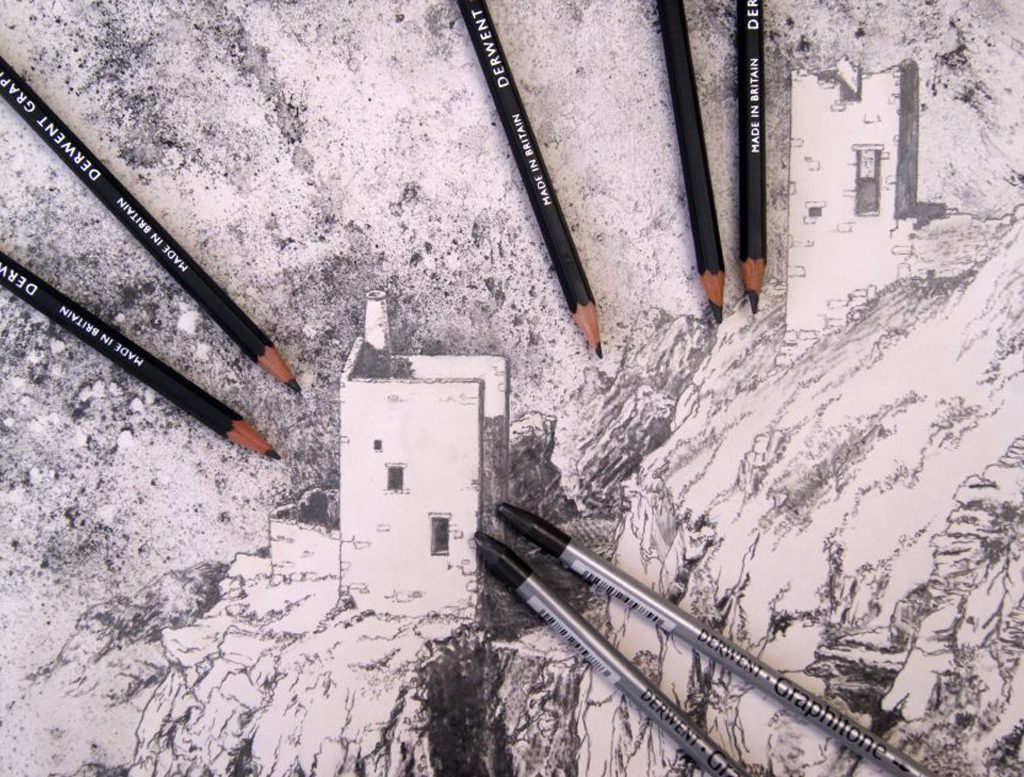 To create the white surf and foam of the incoming rough sea I softly rubbed the Natural Graphite sticks (end-on) over a bumpy, textured sheet of old plastic I had.

The lowest boulders in the sea and some of the very bottom rock faces were largely put in with Derwent’s big, chunky XL Graphite Sticks (soft and very soft grades), again applied end-on but only after cutting into the flat ends with their inventive Groove Cube. This is a clever tool with 6 differently serrated sides (remember to save the shavings for your grate ‘n’ shake pot). 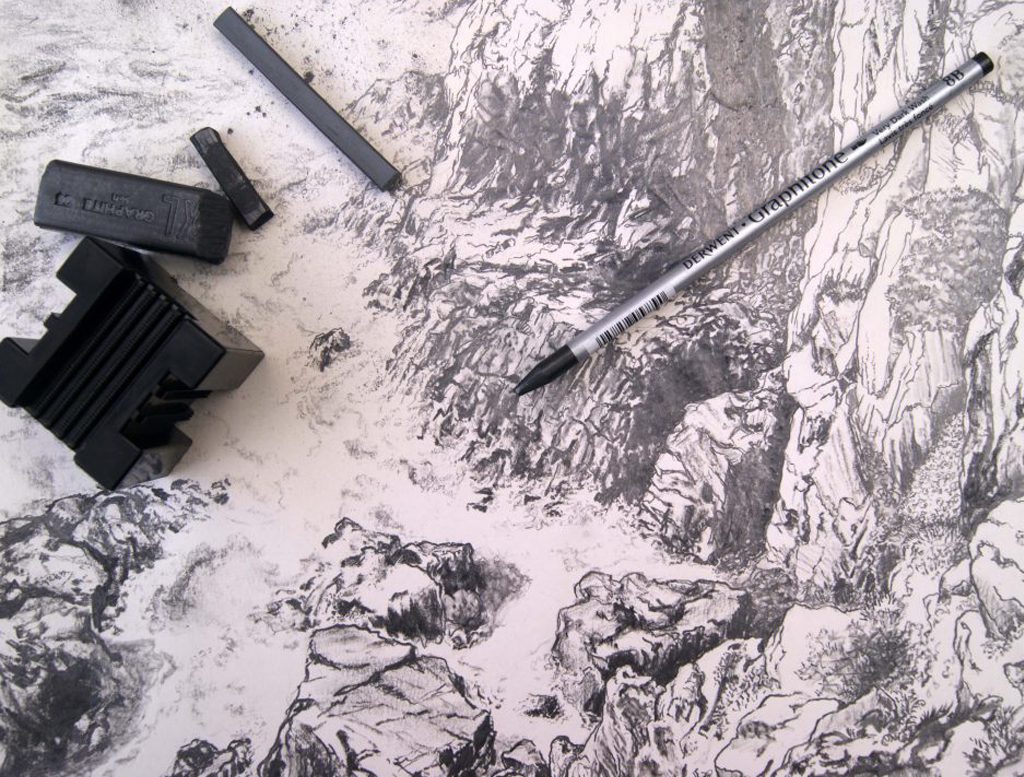 The solid, rich, dense passages of the picture were achieved courtesy of Derwent’s dark and very dark Graphitone sticks over slate placed under the paper. 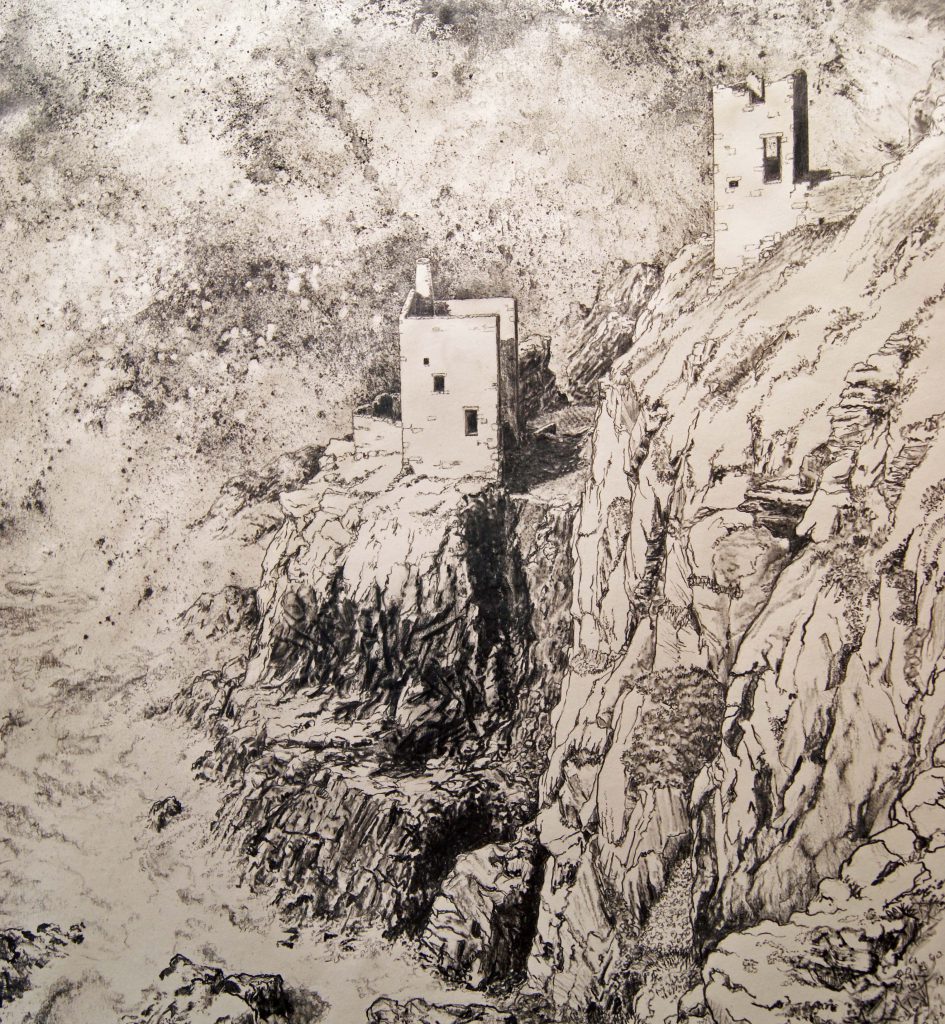 Some closer and foreground textures were put in with the aid of a range of under paper substrates including travertine stone, wood and fibreglass.

If working ‘en plein air’ I do try to incorporate rubbed passages from stone or other surfaces at the place as it makes the picture unique to that scene.

The shoreline that day was being ravaged by North-Westerly winds driving turbulent Atlantic waters.

I feel my finished picture “Sunshine then Showers – May Day at Botallack” does capture this mood and the drawing was great fun to do though quite experimental for me in parts of its construction.

Follow Dave Wright online and find out more of his drawings and paintings of Cornwall’s coast here: 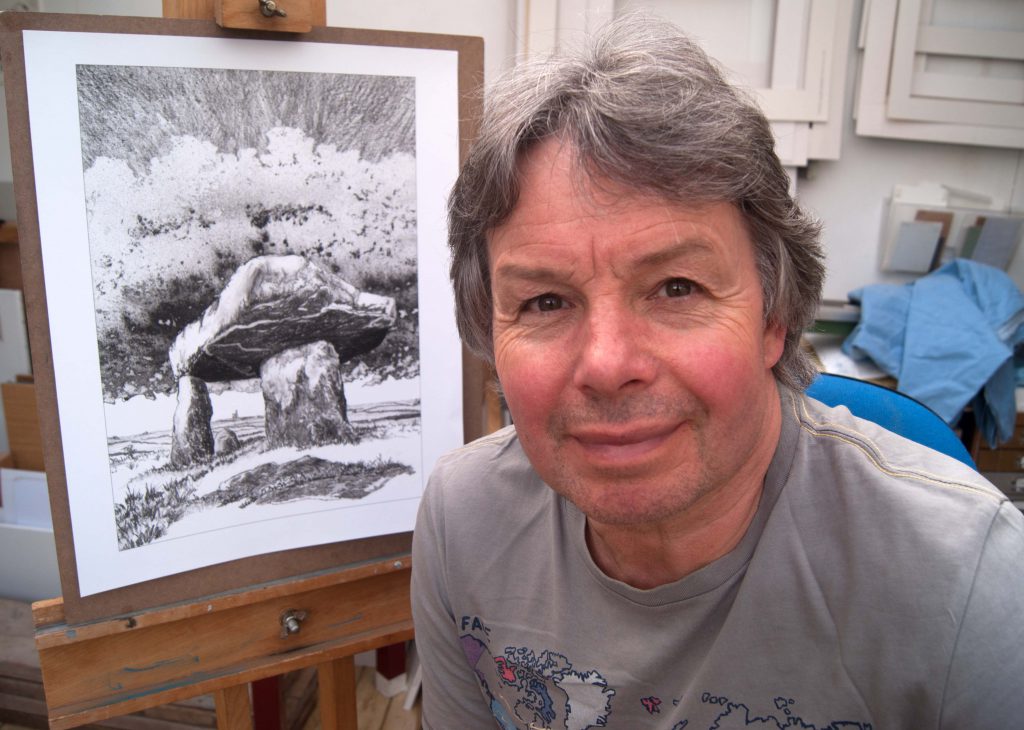